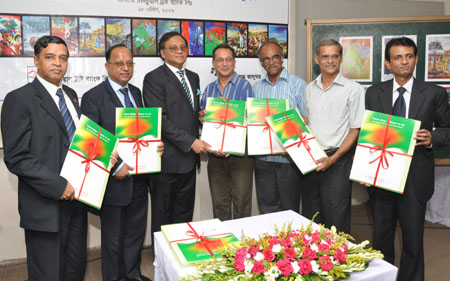 Mutual Trust Bank Ltd (MTB) has donated 1000 copies of the folio of paintings titled “Our Liberation War: Down the Path of History” to Liberation War Museum, Dhaka on April 28, 2009. The folios were handed over at a simple ceremony held at the Museum’s Auditorium. On this occasion a discussion meeting was held where MTB Managing Director & CEO Mr. Anis A. Khan, MTB Senior Executive Vice President Mr. Md. Hashem Chowdhury and trustees of Liberation War Museum Mr. Tarik Ali, Mafidul Haq, Akku Chowdhury were present. In his speech MTB Managing Director & CEO Mr. Anis A. Khan told that the new generations must know the true history of our liberation movement which will inspire them to move the country forward. In this regards the folio of paintings donated by MTB may play a crucial role, he expected. He also informed that MTB will continue such programs in future for the interest of the nation in addition to its banking business. Mr. Hashem, in his speech, informed that MTB had been actively participating in CSR (Corporate Social Responsibility) activities since long and as a part of these activities MTB initiated to inspire the new generations with the spirit of liberation movement. Mr. Mafidul Haq, trustee and member secretary of Liberation War Museum, appreciated the initiative taken by MTB and assured that the copies of the folio will be spread among new generations across the country. Among others Mr. Swapan Kumar Biswas, Senior Vice President, Mr. Md. Tauhidul Alam, Asst Vice President of MTB and a host of journalists and members of the Museum were present on the occasion.