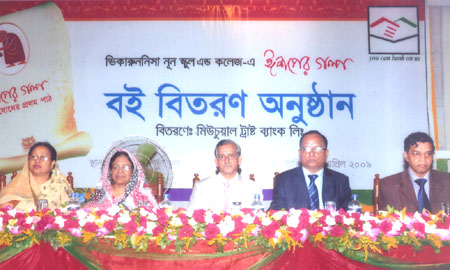 Mutual Trust Bank Ltd donated 10,000 books on moral values titled “Ishoper Galpo- Mullobodher Prothom Path” to the school wing students of Viqarunnisa Noon School & College on April 9, 2009. The books were distributed among the students through a simple ceremony held at the auditorium of Viqarunnisa Noon School & College at 1/A New Bailey Road, Dhaka-1000. On this occasion a discussion meeting was held with Ms. Rokeya Akhter Begum, Principal of Viqarunnisa Noon School & College in the chair. Mr. Quamrul Islam Chowdhury, Deputy Managing Director of Mutual Trust Bank was present as chief guest while Mr. Md. Hashem Chowdhury, Senior Executive Vice President of Mutual Trust Bank attended the function as special guest. In his speech, Mr. Quamrul Islam Chowdhury underscored the necessity of educating the children on moral values so that they can lead the nation with high level of ethical standard in the coming days. He also explained that corruption and terrorism are the main barriers to the development of our nation. In this respect stories of the book can play a vital role to educate the future generations and move the nation forward, he expected. Mr. Md. Hashem Chowdhury, in his speech, informed that MTB had been actively participating in CSR (Corporate Social Responsibility) activities since long. The Bank was always by the side of the common people in every crisis of the nation and as a part of these activities MTB initiated to spread education on moral values to the new generations so that they can achieve high ethical standard. Ms. Rokeya Akhter Begum said in her speech that in this ruined age of moral values, new generations must be inspired with values and in this respect books donated by MTB will help build up a society free from corruption, terrorism and all ambiguity. Among others, Mr. Swapan Kumar Biswas, Senior Vice President and Mr. Md. Tauhidul Alam Asst Vice President of MTB participated in the function. After the discussion was over books were handed over to the students.